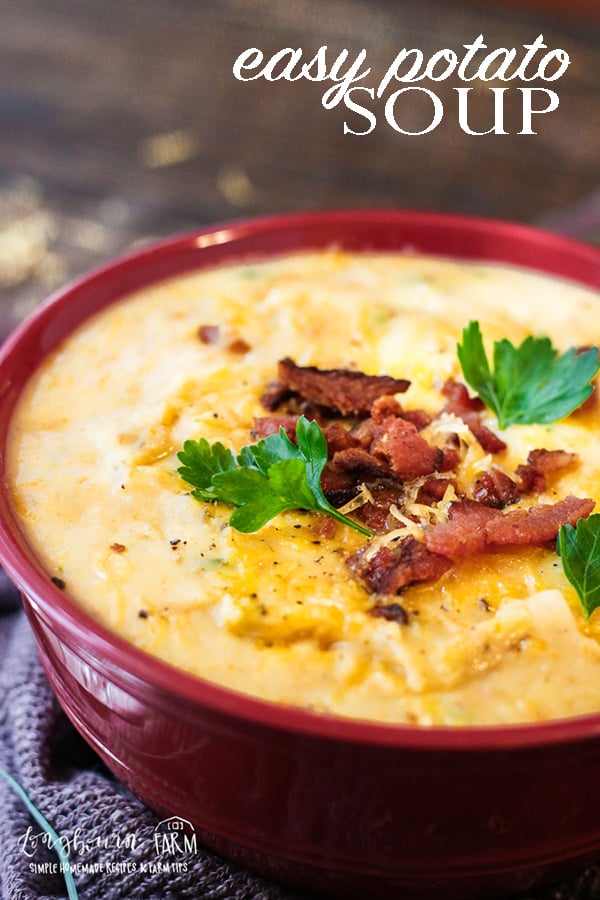 This easy potato soup recipe is absolutely delicious. It’s easy and quick to put together and definitely a meal the whole family will love!

There is nothing I love more than a warm meal on a cold night and this easy potato soup is perfect when you need some comfort food. It’s simple to throw together and I’ll even give you some slow cooker instructions so you can easily make it anytime!

What potatoes should I use for easy potato soup?

I love it both ways, so use whatever you have on hand. I also like to thin mine down quite a bit – it can get pretty thick! Keep some extra milk on hand to get it to your favorite texture and consistency. Either way, this turns out to be a really creamy potato soup recipe.

Can I freeze this easy potato soup?

Yes! A definite resounding yes. This potato soup is one of my favorite recipes to freeze – and you should all know by now that I love my freezer.

When I freeze this potato soup I still make it according to the recipe, but I don’t add the chopped bacon because it gets squishy. This soup definitely qualifies as a potato bacon soup so don’t skip adding it or cooking with the grease, those steps add great flavor. I usually save the bacon and use it in another recipe and then make fresh bacon to serve with the frozen soup.

When serving this easy potato soup after freezing, you may need to adjust the consistency a little bit with water, broth, or milk. Use whatever you prefer to get it to your desired consistency.

As always, my favorite way to freeze soup is to portion it into plastic zipper bags and lay them flat on a cookie sheet until they are frozen, then I stack them upright in my freezer. You can also use disposable soup containers that stack and those are super handy as well!

How do you thicken potato soup?

There are several different ways that you can thicken up your potato soup recipe.

The simplest way is to take some of the soup and blend it into a puree before stirring it back into the soup mixture. This is best done for the chunky potato soups.

If you have a creamy potato soup that needs thickening, adding in some instant mashed potato flakes can get the job done well. You could also stir in a cornstarch slurry to help get the soup a bit thicker as well. All three of these methods work well, so use whichever method is most convenient.

Should you peel a potato for soup?

If using russet potatoes then the answer is yes. Russet potatoes (baking potatoes) have much thicker skin than red or yellow potatoes and will result in chewy skins throughout the soup that many people will find to be unpleasant.

Red and yellow potatoes have much thinner skin that once cooked, becomes virtually unnoticeable. You can choose to peel these potato skins or leave them on.

Why do you add flour to the potato soup?

Flour is a thickener when added to soups and stews. It helps to make the soup slightly thicker, giving it more of a body and making it less broth-like.

There are so many different potato soup recipes out there that the variations are limitless. Some great options include:

Can I make this easy potato soup in my slow cooker or crockpot? 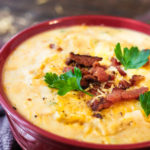