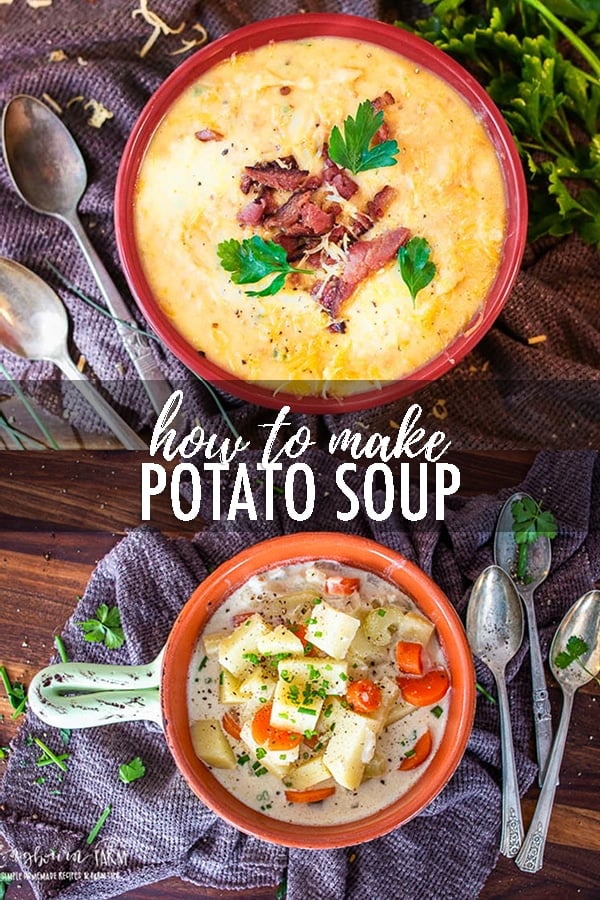 If you need all the tips on how to make potato soup, check out this post! Recipes, questions and answers, storage tips and more.

Potato soup is a delicious and versatile dish that is truly a comfort meal in every bite. It’s warm, filling, and great at any time of the year. Curling up during the colder months with a warm bowl of potato soup is always a great way to improve your spirits and feel at ease.

Another great benefit of potato soup is that it’s usually pretty frugal to make from home. When you know how to make homemade potato soup, you can do so often for the nostalgia and for the money-saving benefits that come with it. Use up some of those aging potatoes in the pantry and get yourself a tasty frugal dish that doesn’t feel cheap.

How to make potato soup

There are many different ways to make potato soup, but the common basics have it starting out with the aromatics. In a pot, you heat up a fat (usually olive oil or butter) and then your saute onions, carrots, celery, until soft and toss in some garlic and fresh herbs to get the flavors working.

Depending on the soup recipe and how thick it is in the end, you may see the recipe request a roux to be made. This is as simple as adding in some flour to your pot and whisking it around with the vegetables and whatever oil/fat is in the pot.

After that its time for the liquids. Most of the time you’ll see that chicken broth or stock is requested, but water or vegetable broth/stock can also be used if you adjust the seasonings to account for the missing flavor.

After adding in the liquids and getting them going, it’s time to add in the potatoes. They’ll boil until soft and at that point, the soup is technically done and edible. Although many soups will have you add in milk as one of the final steps.

If milk is called for in your potato soup recipe, be sure to add it at the end, off of the heat so it doesn’t curdle.

My instant pot potato soup recipe has chunky potatoes and vegetables in a nice flavorful broth.

How to make creamy potato soup

While you can eat your potato soup chunky most people think of a creamy and thick chowder-like consistency when they make their potato soup. You can achieve this many different ways including:

I have a recipe for creamy potato soup that you’ll enjoy if you’re looking for an easy recipe to follow along with!

So as you can see, making homemade potato soup isn’t difficult or hard. That being said, there are still some pretty common questions asked about potato soup, so let me try to cover some of the most asked questions to help settle your nerves.

Can I freeze Potato soup?

So depending on your potato soup recipe you may choose to not freeze any leftovers. While your potatoes will be cooked and safe to freeze, any dairy in the soup will make it unfreezable.

What type of potatoes are best for soup?

If you’re looking for a nice and thick potato flavored soup then you can’t go wrong with Russet potatoes- they’ll really help to thicken the soup up nicely!

If you want a thinner soup then other potato varieties like red potatoes, Yukon gold, or even sweet potatoes can be used depending on the recipe.

How do I thicken Potato Soup?

Thickening potato soup is pretty easy, the fastest way to do it is to simply add in some instant potato flakes. Other ways include doing a cornstarch slurry or blending the soup so that the potatoes are more broken down.

Do I have to peel potatoes for soup?

While most people will choose to remove the skins of their potatoes for soup, you can choose to leave them on. This is completely up to your personal preference! The added textures can be something you enjoy, or it could be something you’d like to avoid. There is no right or wrong.

Can you overcook potato soup?

Believe it or not, it’s pretty hard to mess up a potato soup recipe! While you can overcook the potatoes and have them crumble when the soup is stirred, the soup will still taste great. Burning the soup is a completely different matter though, so keep an eye on your soup and remember to stir.

With all of this newfound knowledge about potato soups, aren’t you ready to get on board with making your own tasty batch of homemade potato soup?