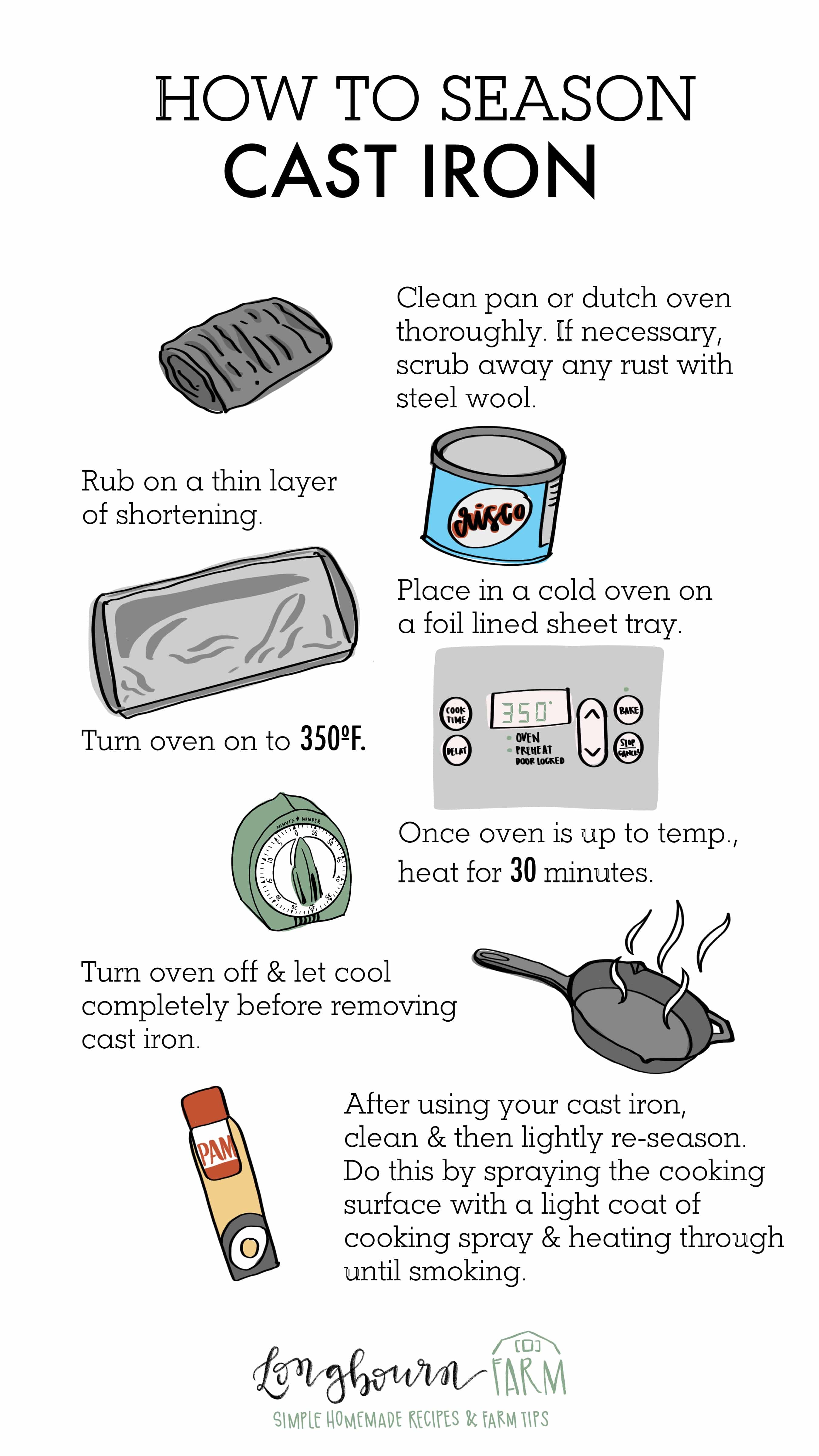 Learning how to season cast iron isn’t as hard as it seems. With a few simple steps, you can easily take care of cast iron and have it last for decades.

Cast iron has a great reputation for lasting for generations if treated right, but it often intimidates people away from the initial investment. Which makes sense considering the amount of work needed to keep a cast iron in tip-top shape.

Once you know how to season cast iron, it’s significantly less scary and you’ll be wondering why you didn’t buy one sooner.

How to clean a cast iron for seasoning

Cleaning cast iron isn’t like cleaning any of your other pots and pans. For one thing, you’re not allowed to use soap. Well, you can, but it would result in everything you cook from that point on tasting a little sudsy.

You can clean cast iron with a steel wool brush, or scrub sponge designed to handle cast iron. This helps to get rid of any food particles as well as rust. If there is no rust, and only food particles needing to be removed, you can use water and kosher salt as a way to scrub your cast iron clean.

Whichever method you use, make sure to wipe it down with water or run it under the faucet to remove all of the icky stuff you don’t want on your pan anymore.

Once that is done, place it on a stove burner on medium-low and let the water evaporate off of your pan to prevent rust spots.

Now you can season the pan.

Rub your warm cast iron pan with your seasoning oil of choice. Remember that you just warmed the cast iron. While it will be easier to spread the oil or grease around, you should make sure to be careful not to burn yourself in the process.

Many people will use a paper towel dipped in their seasoning oil and rub that around the pan to avoid direct contact with their hands.

You want to try to not over-do it with the oil.

Too much can result in puddles and once cured can give an uneven texture or if it doesn’t cure well enough it can become sticky. It’s much better to apply the layers thin because you can always add later.

How to season a cast iron

Bonus: If you do this during the winter months, you can crack open your oven ever so slightly and help heat your home without needing to adjust the thermostat of your house. You paid for the oven’s electricity, might as well get your monies worth.

What is the best oil to season a cast-iron skillet?

This is where a lot of cast iron fans can easily disagree. While all cooking oils and fats can be used for seasoning cast iron, everyone will have their own personal favorites.

Some different options for seasoning cast iron are:

What you really want to consider is the smoke point, price, and overall effectiveness. There are also no rules stating that you can only do layers with the same option every time, you are allowed to mix and match.

Do you have to season a cast iron skillet after each use?

The good news is that you don’t have to season your cast iron after every use. The ideal goal of a perfectly seasoned cast iron pan is to be like a non-stick pan. Being able to fry an egg without it sticking is the dream goal.

But you can just as easily add a little oil or grease to the pan to help you while you are cooking.

After using your cast iron, rinse it out and scrape it clean. Then lightly oil the pan by spraying the cooking surface with a light coat of cooking spray. Heat it up on the stovetop at medium/ medium-high heat until it stops smoking. Try not to heat it too hot or it may scorch.

Remember- If your cast iron has rust, it’s not trash

Most of the time a rusty piece of cast iron can be fixed. Exceptions being if the rust is so bad that it literally chewed a hole through the pan. But a few rust spots are just a sign of a weak seasoning layer. Washing the rust off and re-seasoning your cast iron a few times can build it’s strength back up.

Once you know how to season and careful your cast iron, they become much less intimidating and cast last several generations.

« Peanut Butter Brownies
How to Use a Meat Thermometer »