Our chicken coop is complete! We turned a couple of old stalls from a barn that we demolished into an awesome coop and run. See how we did it and get some awesome chicken coop ideas for your own place! 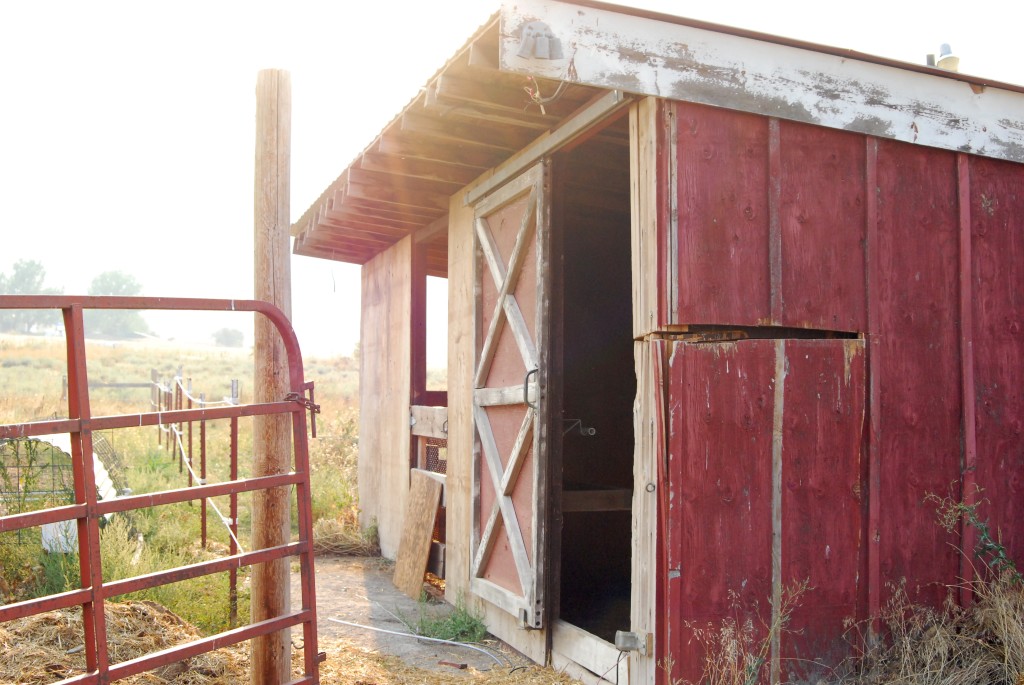 The chicken coop is done! I am so excited. First, we finished demo on the part of the building we weren’t keeping. See this view?! There isn’t one thing blocking it, that’s the great part! Oh, except that pile of stuff we need to throw away. We saved all the other wood, four truck loads. Four truck loads of pure fun! Or my brother stepping on a nail. Either one. {Update: Find the tutorial for the chicken feeder and waterer here!}

This is the back wall of the coop, where we mounted the nesting boxes.

We made the nesting boxes out of an old cabinet I found in the main barn. We cut it down by a third because it was really long.

We also added dividers and closed up the sides so it was it’s own little box.

Next, we mounted the box on the back of the coop with the doors out. That way, I can just open the doors of the cabinet to get the eggs out. Another great chicken coop idea!

After it was mounted, we cut out the areas for the boxes from inside the coop. I need to frame out the boxes to make it look more even and I think I need to put a little ramp up to the higher ones. I don’t think the chickens even know they are up there.

On the wall opposite the nesting boxes, we built the roosts. I used this idea with a few variations. We built the base and mounted with L brackets.

We also build a feeder using this design. I like it but the tray I picked out is a little to brittle and cracks easily. {*Update!* Check out the feeder and waterer tutorial here!} I have the food and water on cinder blocks so the chickens don’t make a mess of it. Because they will if it is on the ground. They are kinda gross that way.

The area next to the coop we made into a run. We cut a small doorway between the studs and trimmed down an old door we had to close it at night.

I lined the gate with chicken wire to keep the chickens in and I still need to chicken wire the slats on the other side of the chicken run. They can also fly over the top…a problem I haven’t solved yet :).

On the outside, we mounted an old door that was from the building originally. We put it on a slider track so it wouldn’t open into the fence. Also, just ignore that huge slice in the side of the building. That happened last winter and will be discussed at another time….. {ahem, we are fixing it}.

We also reinforced the entire building with hurricane braces. We are a little paranoid after the last half of the building blew over. There were also holes already in the building, I think they used them to put hay through the walls. Anyways, I put chicken wire on them. I also want to frame them out to make it look a little more finished.

We also need to have a better solution for covering up these wires and the outlet so the chickens don’t bug them. Because those cinder blocks are being super effective.

That is it! It took us about 4 days of working really hard. And really late. Andy is awesome and was super great about indulging my every whim with this project. I think this photo was taken at 11:00. PM. In case the dark wasn’t an indicator. We also chased chickens around for about 45 minutes three nights in a row. But they know it’s home now and just put themselves to bed these days.

Also, this shelf was in the run part. I think I have a plan for it! Just ignore it’s grossness right now.

Pin this farm tip on your Chicken Keeping board to SAVE it for later! Follow Longbourn Farm on Pinterest for more great tips, ideas, and tutorials!

If you’ve wanted to try your hand at keeping chickens but don’t know where to start, check out my free email course!

« The Chicken Coop Project {with a confessional}
My hens eggs vs. Store eggs »