Home » Animal and Land » Livestock » How to Band a Bull Calf

Check out this post for all the information you need on how to band a bull calf. It’s really easy, humane, and quick to get done! Get the details. 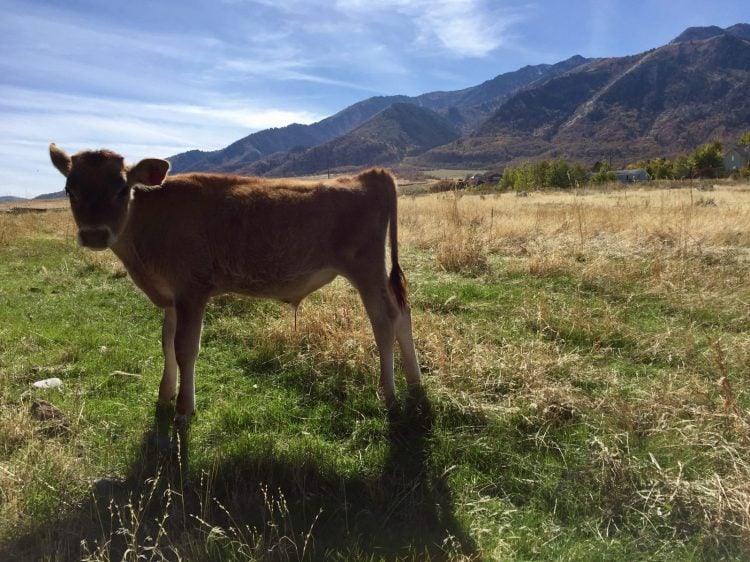 Today’s Farm Tip Friday is coming to you on Saturday…because sometimes that’s just how things go. But it’s a good one! I’m going to tell you all about how to band a bull calf. If you come here mostly for the recipes and don’t know what I’m talking about, banding a bull calf is a way to castrate them, which makes them a steer instead of a bull.

Steers = fixed male cattle, Bulls = in-tact male cattle. Castrating our bull calf was necessary for a few reasons, the number one reason being we raise our steers for meat and castrated male animals grow better than in-tact male animals. The other main reason is safety. Bulls are very dangerous to be around and we don’t have the capability or desire to deal with that on our small farm. There are more reasons, but those two are the most important to us.

If you’d like to learn more about how we raise our steers and get more information if you’re interested in doing the same, check out these two posts!

This was actually our first year buying bull calves. In the past, we have purchased a weaned steer {already off the bottle and castrated}. This year we bought bottle babies and I’ve written about some of our adventures and learning curves with how to bottle feed a calf and how to bucket train a calf, and now I’ll share banding! Banding our bull calf was super easy and if you’re worried about how humane it is and how bad he would hurt from it, I was too.

Well. I needn’t have worried. He didn’t even notice. For reals you guys. Like didn’t even notice when the band went on and didn’t notice afterward either. He cared a whole lot more about how much grain was left in the bucket I gave him to bribe him into our make-shift chute.

In fact, I got stung by a hornet right before we banded him and I was in a lot more pain than he was for a lot longer! Which is a good thing, I didn’t want him to struggle. I struggled that night though. After getting stung by the hornet and throwing the two vaccinations we were going to give him across the barnyard {and maybe saying a bad word} I failed to secure his head well enough in our make-shift chute and ended up thinking I had the needle in when really it was just stuck in his fuzzy coat because he was wiggling and squirted one of the vaccinations all over myself. It was super. And we were being eaten alive by mosquitos the entire time too. Sometimes life on the farm is a big fat buggy party where you waste time and money. Even if it is only 10 minutes.

Anyways, now that I’ve established that I obviously deserve to use the #prostatus when I share this on Instagram, I’ll tell you all about how to band a bull calf.

and some Castrating Bands

. These are recommended for use in cattle that are 250 pounds or less. If they weigh more than that you’ll need a different kind of bander and bands or you’ll need to use a different method of castration. I’m not exactly sure how much our bull calf weighed, but if I had to guess I’d say right around 200 pounds. I waited a while to band him because I wanted him to older, older animals deal with stress better, and I wanted most of the flies to be gone to avoid issues with irritation and infection. 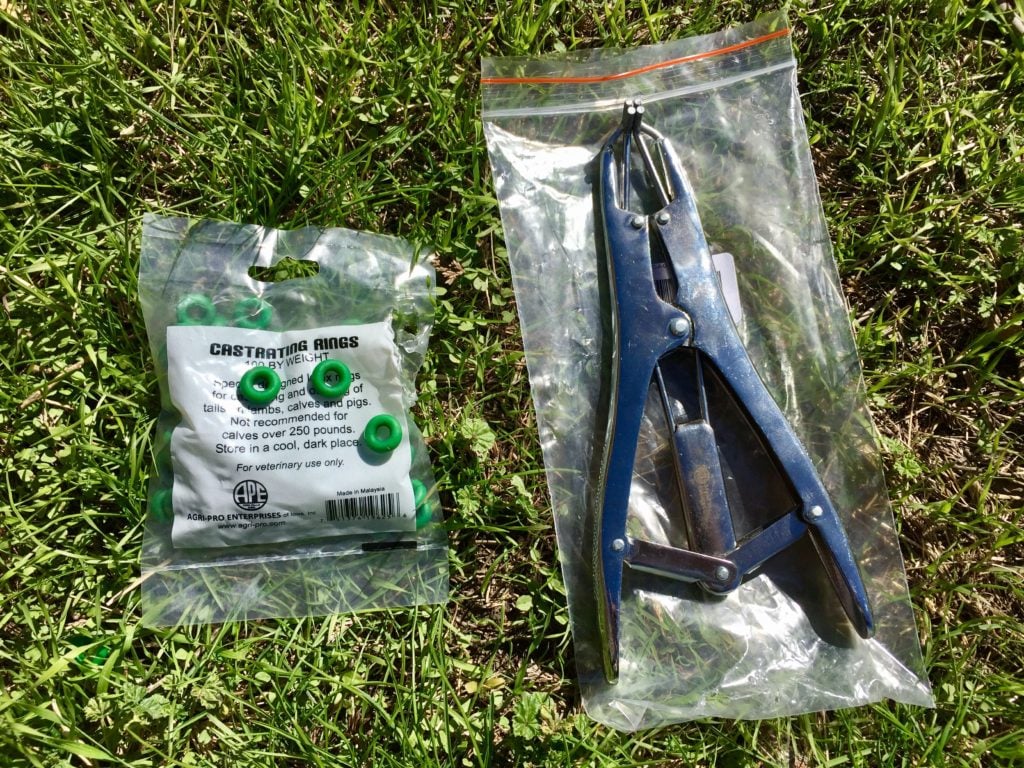 The problem with waiting longer to band your calf is that they will be bigger and stronger. It’s pretty easy to man-handle them and keep them still when they are littler. In fact, you can really just lay them down and take care of it. When they are bigger though you’ll need some help. I just used a method I’ve used a thousand times to draw blood on loose cows when I was by myself for my MS project. Andy didn’t really get it at first, so I’ll include some photos so you can know what I’m talking about.

First, find two panels or a gate against a building you can fold in almost totally in on themselves so they form an acute triangle, like in this photo. 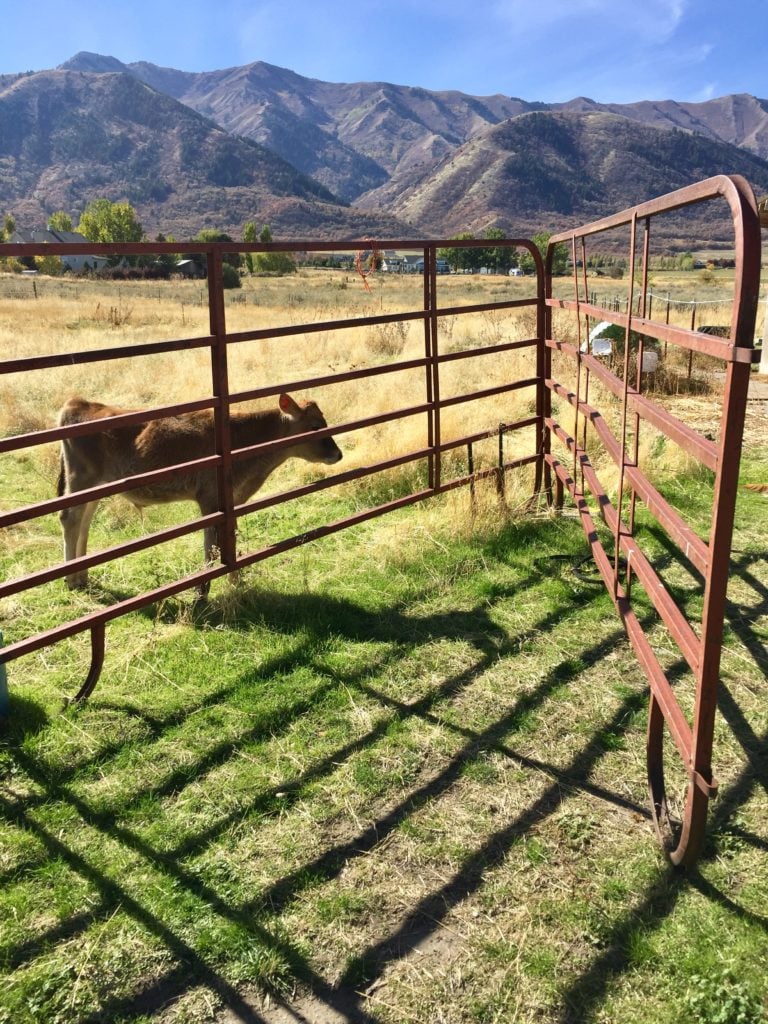 These ones actually were a little farther apart than I would have liked. You’ll push the bull calf up into the corner {or bribe him with grain 🙂 }. 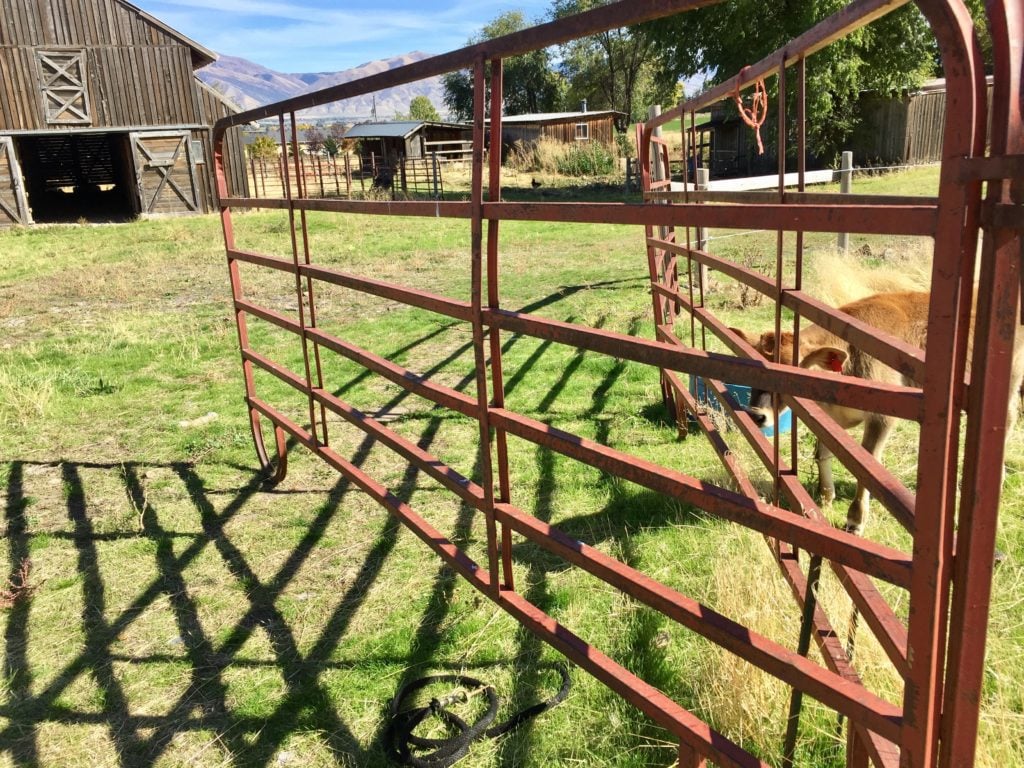 If the slats in the panel line up right, you can slide a piece of wood or a metal bar in behind him so he can’t move backward. Ours didn’t line up to work that out so I used a rope instead. I secured it to one of the panels, looped it around his back-end, and then just had Andy hold it for me. 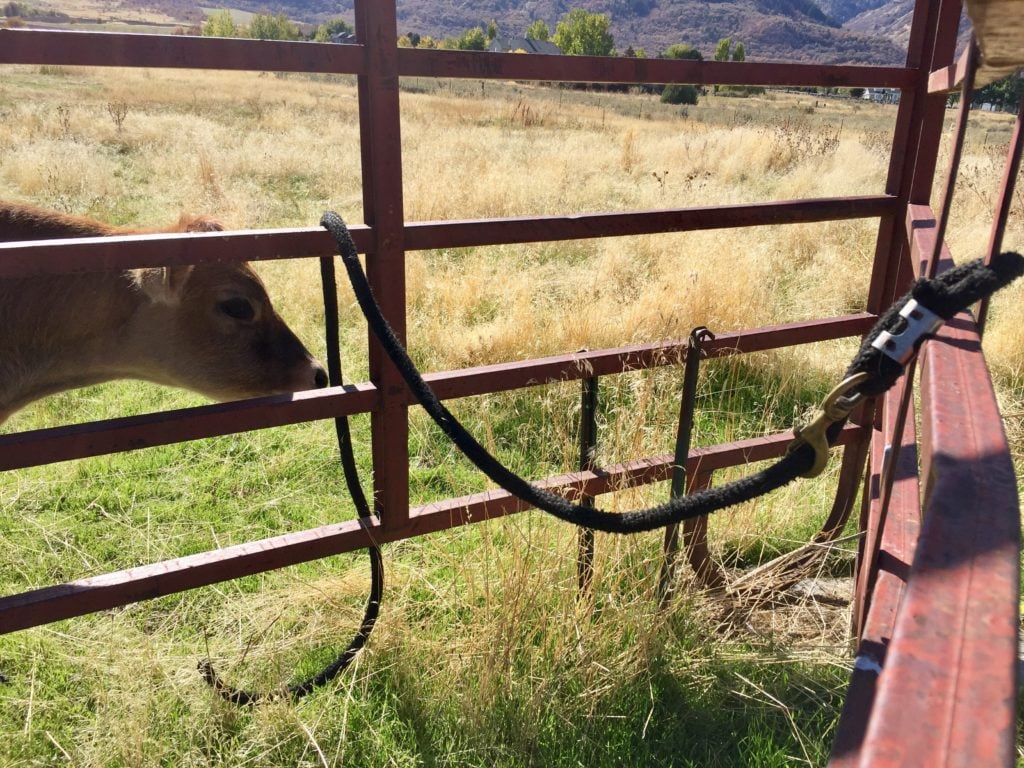 Because our panels didn’t close quite tight enough, he was able to wiggle around and I didn’t have his head secured which lead to me messing up a vaccination. So, if that is the case just secure their head with a rope halter to the front of the panels. If they can squeeze him in there a bit though securing his head won’t be necessary.

I hope this would go without saying, but I feel the need to mention it: if your bull calf is really big or really wild, this isn’t going to work and they will pull or push the panels down if you tie them to the panels. Or even if they aren’t tied to the panels. Which is very dangerous for everyone – you and them. Please don’t be dumb when doing things like this. Our bull calf isn’t super big and he is a Jersey so he is quite docile. He also loves grain, which greatly helps any situation. If you have a larger bull calf or a wilder one, make sure you are using a secure structure like a panel and the side of the barn or something similar. Or just use a chute if you can access one!

After he was secured and I’d successfully-unsuccessfully vaccinated him, we moved on to banding him. It was super easy. You put the band on the bander, there is a little groove where it sits. 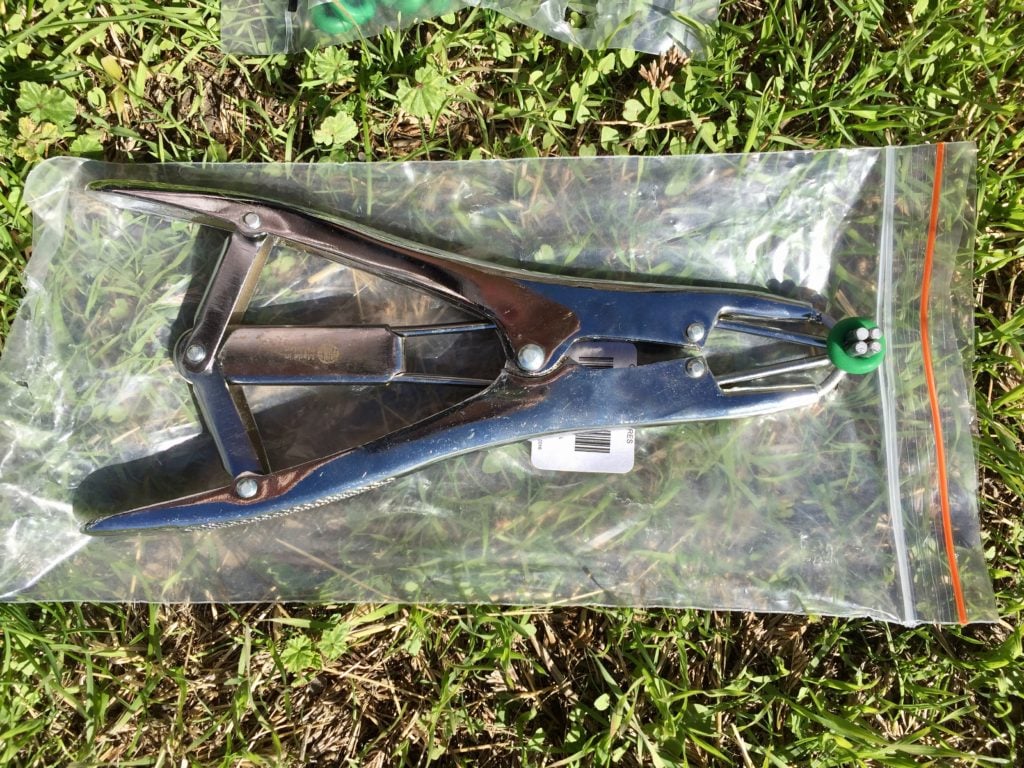 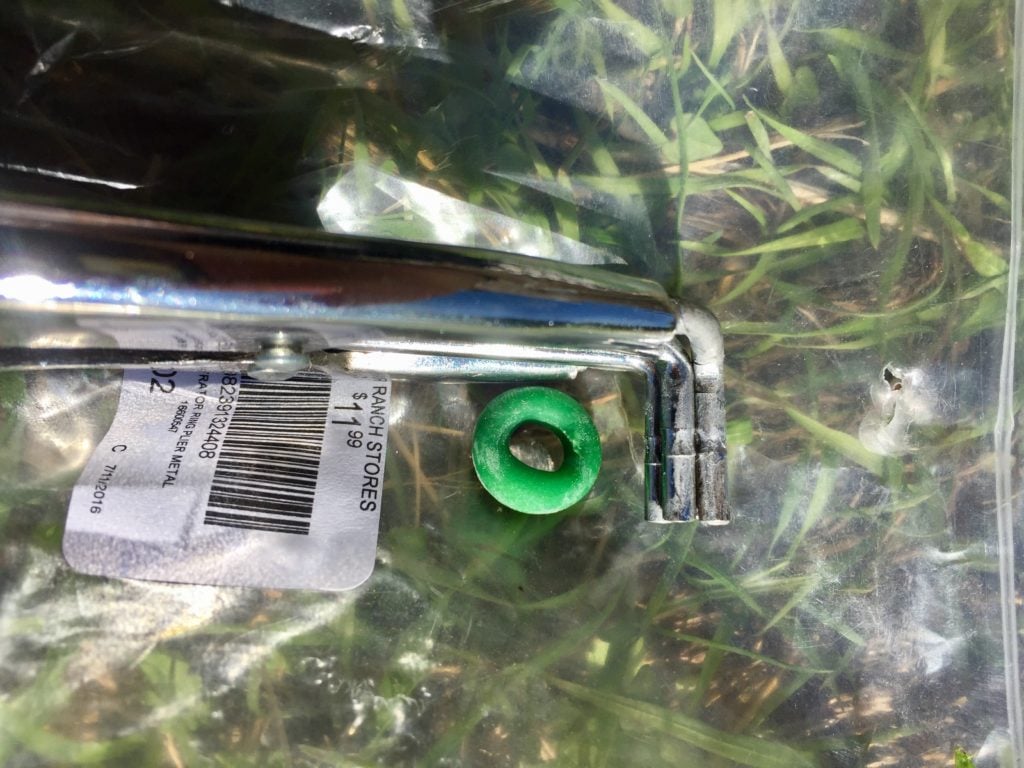 Then you’ll open the bander up, and slide it over his testicles. 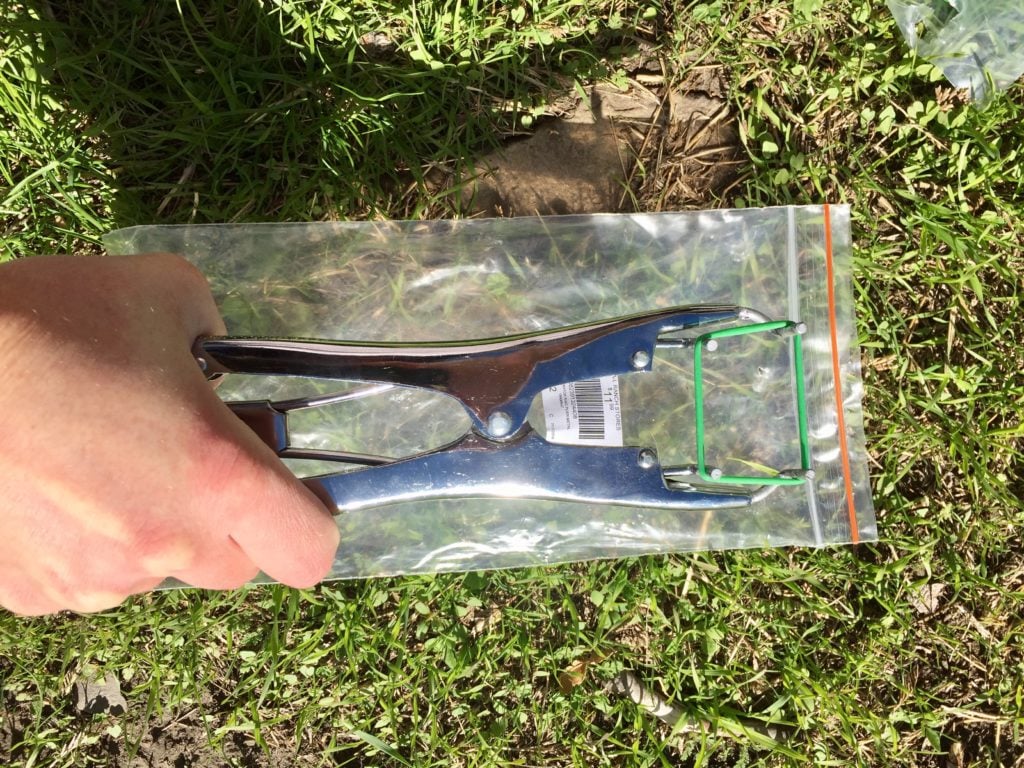 I also hope this would go without saying, but I’ll mention it anyways. Make sure you get both!! Ha. You don’t want to miss one, you’ll be able to feel if you’ve got two in there.

It’s best to be directly behind the calf when doing this. Cattle kick out to the side before moving their legs backwards to kick, so you’ll have time to get out of they way if he’s feeling feisty. Hence the term “cow-kick” is when a horse kicks out to the side. Please trust me on this one. I’ve taken literally thousands of blood samples from cow tail veins, standing directly behind them {which is very counter-intuitive if you grew up around horses} and got kicked at plenty of times, but never hit. Also, just don’t do dumb stuff. Don’t stick your face down there and don’t sit down while doing this! Always be in a position where you can quickly move if necessary. Like in sports. Or I’m told that how sports work. I haven’t played very many 🙂 .

After the band is on, you just wait and let mother nature take care of the rest. Banding basically cuts off the circulation to the testicles, which in turn means they eventually die and fall off. We banded our calf about 2 weeks ago and the process is currently wrapping itself up. I was worried about him being in pain for a few days, but he really never even acted like he noticed.

I hope this post was helpful! Now we both know how to band a bull calf. Let me know if you have any suggestions or questions for me in the comments!

Pin this farm tip on your Hobby Farming board to SAVE it for later! Follow Longbourn Farm on Pinterest for more great tips, ideas, and tutorials!