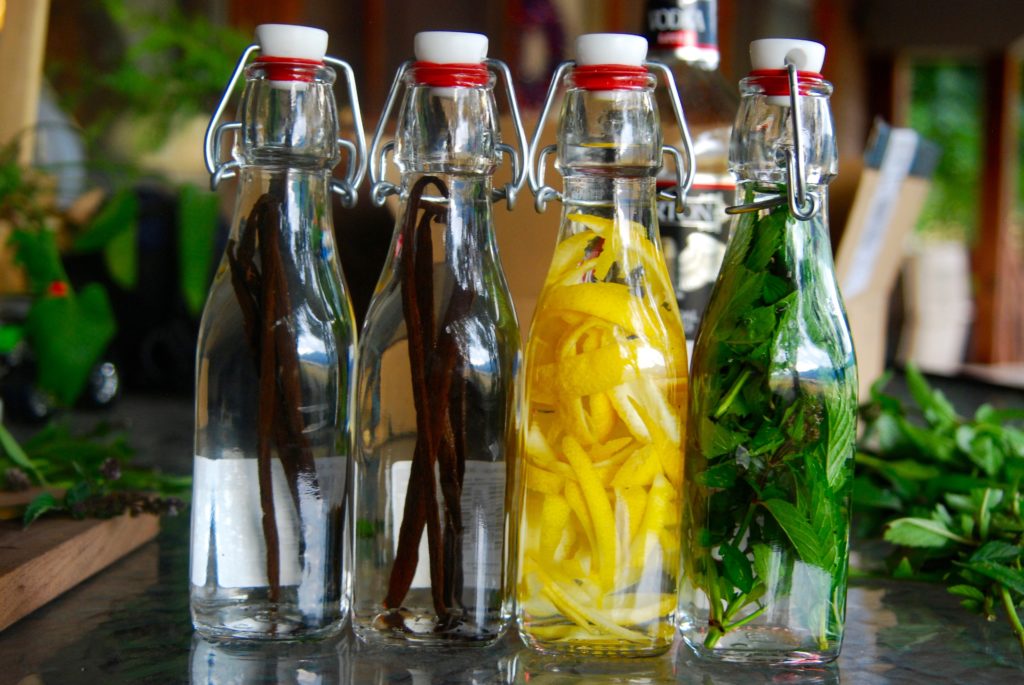 A few months ago, I wrote a post lamenting how I really wanted to make homemade vanilla extract but was having trouble knowing what kind of alcohol to use {non-drinker here!} and what ratio’s to go with. I did some more research, had SO many helpful suggestions from all of you, and finally made them last week!

I’ll outline what I did, and then give updates in the coming months on how they are turning out.

First, I actually ended up making homemade vanilla extract, lemon extract, and mint extract. I have since decided I also need to try almond and about 10 others. It’s just so much fun!

And no, not because I had a few sips while I was getting this all ready 🙂

Although Abram was really positive he needed a drink of whatever was in that giant bottle…ha! 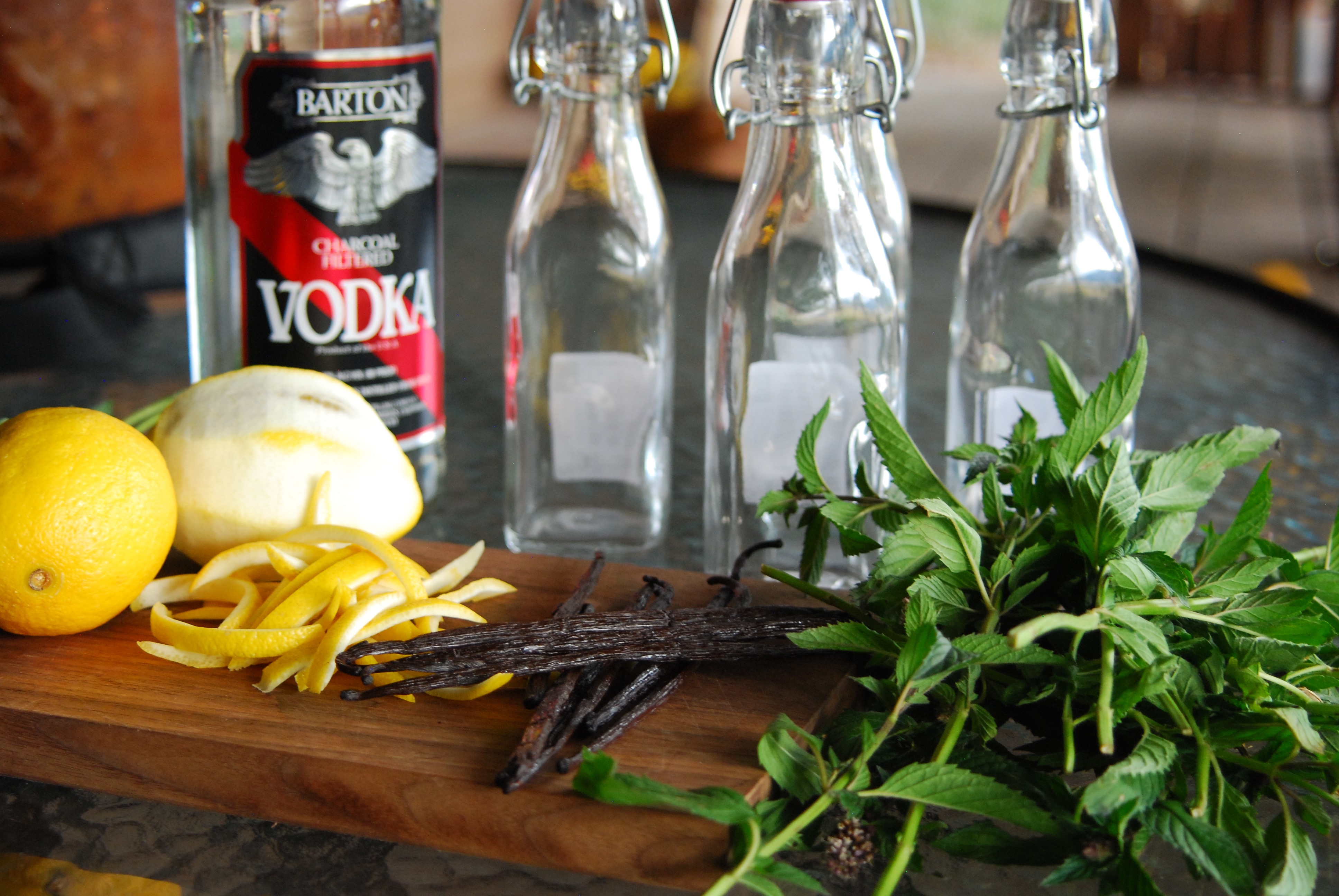 Per many recommendations from you awesome readers, I went with a cheap vodka. You can also use rum {and I’ve heard bourbon as well} but vodka is kind of like a blank base for the vanilla to shine through, the others add some extra flavor. Since this was my first experiment, I wanted to go basic so I’d have something like a “control” to compare to in the future.

I know, it’s the scientist in me. I just can’t help it.

Anyways, I picked the vodka purely on what was cheapest since the overwhelming majority of research and personal opinion suggested that was fine.

to put everything in and estimated I’d need about a liter of vodka. Actually, my friend who took me to the liquor store helped me estimate that amount. She is a very good friend. She had the compassion to accompany a very pregnant lady with a toddler into a liquor store. In Utah. I think she deserves a medal.

The vanilla beans I purchased aren’t available anymore, but these Vanilla Beans

are similar and would work just as well. The only caveat you need to be aware of when purchasing beans is that they need to be soft and pliable.

They will be labeled as “fresh” or something similar. Don’t use dried vanilla beans. I ordered mine because that was the easiest thing for me since I didn’t want to drive all over creation trying to find them in a store. I have heard rumors that Costco sells them, let me know if that is the truth! Although we don’t have a Costco here. I know, it brings a tear to my eyes as well.

You’ll need about 2 ounces of whatever alcohol you choose per vanilla bean. This amount almost covered the beans, so I just topped them off a bit and used a little extra per bottle. 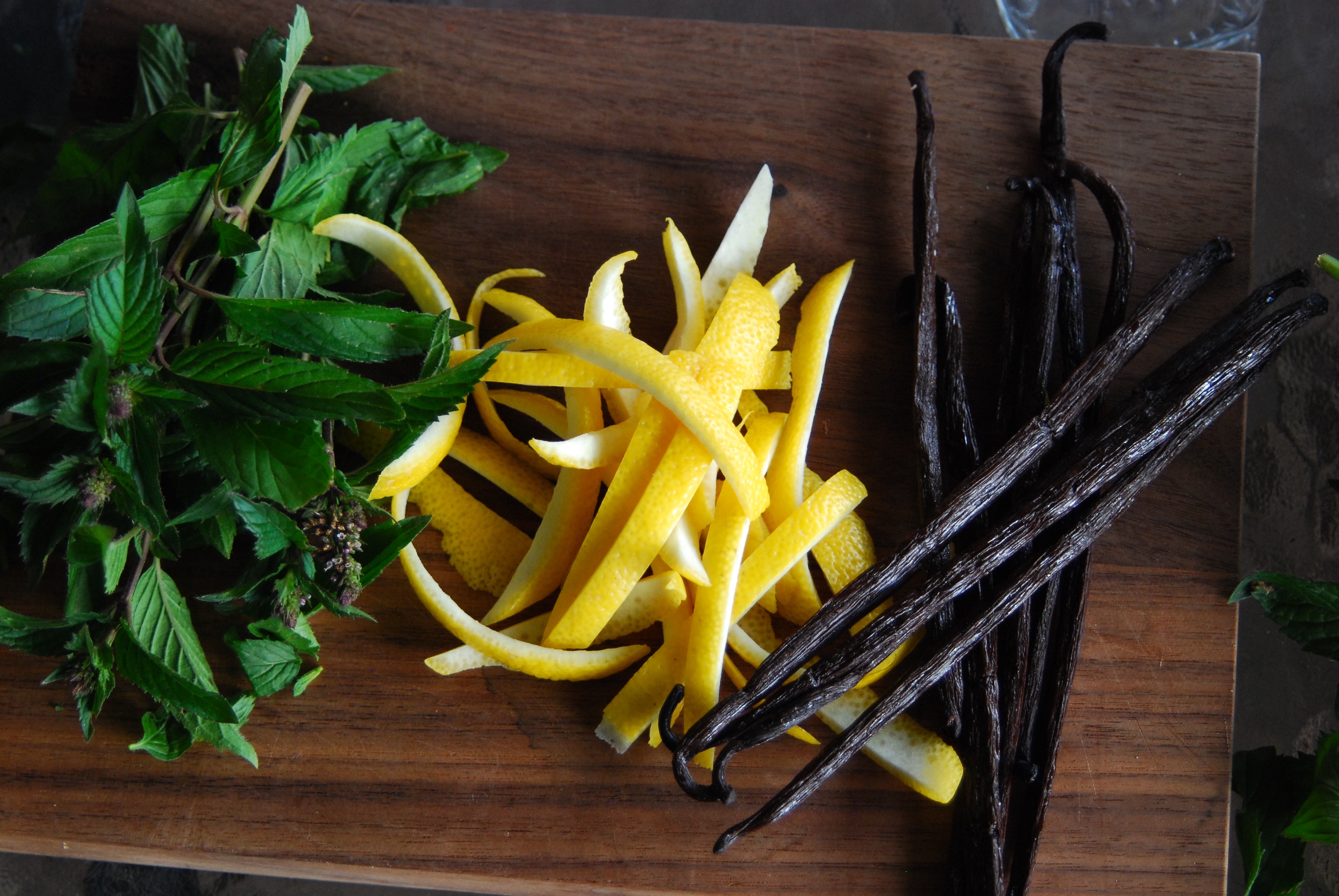 For lemon extract, I used about 1 cup of lemon zest {it was from 2 lemons} and 8 ounces of vodka.

For the mint extract, I used about 1 cup of fresh mint from my garden {just regular mint, not spearmint} and 8 ounces of vodka.

I came up with these ratios after looking at many recipes I found online. They were all pretty much the same, I used a little more lemon and mint per amount of alcohol so they may be more potent. Only time will tell!

This was really easy to do, the hardest part is going to be waiting! They should be ready for holiday baking, which will be fantastic. I can’t wait! As I said before, I’ll be posting updates on how they turn out.

Have you ever made homemade vanilla extract?

« Night Time is the Sweetest Time
Wondering How to Compost? »