Home » Farm & Family » My Favorite Animal is Not A Skunk

One of the smells of summer around here is skunk stink. It’s just a fact of life. They like to hang around our yard, I’m assuming because there are so many wonderful little places for them to hide under. We’re working on that. Anyways, one of the smells of morning usually includes the smell of skunk. These are the types of things you just can’t see in that lovely photo of the sunrise I may post, and I feel it’s my duty to share some of the balance that country life inevitably bring us – in this case, skunks. I was pulling in our driveway about 9 pm one night last week after helping with a church function and before I could even get out of the car, Andy called me and said, “Go grab the .22 and meet me out back!”

For some of you, this would be an alarming sentence. For us, it’s pretty standard communication. I’ve learned over the years when instructed to bring a firearm or blow gun or bow and arrow or any weapon of any kind, it’s best to just hasten the call and ask questions later.

Andy has also learned that is the case when asked to go pick herbs from the garden when dinner is almost ready and that Google really can tell you what sage looks like.

So, into the house I went to grab the .22 and some ammo. And at this point I could smell the skunk. And I don’t mean the light scent that wafts through the bedroom window most mornings durning the summer time. I mean the stench you smell when you drive past a dead one on the side of the road.

Which I knew meant that at least one of the dogs got sprayed. Most likely both. It’s a common occurrence. I was just praying Andy didn’t get sprayed. I didn’t think he would want to spend the night in the garage. So I waddled my pregnant self outside as quickly as I could to find Andy shining his flashlight on a very agitated skunk, Poppy circling it menacingly, and Maverick chewing on a stick totally oblivious to the entire situation. That’s usually how things go. Luckily Abram was sleeping peacefully in bed at this point.

Andy quickly took care of the nasty little animal, and I was trying to determine how badly the dogs have been sprayed. Now, I trust most of you have smelled skunk. What you may not realize is that there is a very strange phenomenon that happens when something has been sprayed directly. You are tricked into thinking, “Oh, these dogs didn’t get it too bad!” and about 30 seconds later the smell hits you. Hits you like a cast iron skillet to the head. The first time one of the dogs got sprayed, it actually made Poppy throw up {in the house, of course}. It’s such a strong odor that it doesn’t even smell like skunk, it is one of the most pungent smells on earth and it will turn your face green. 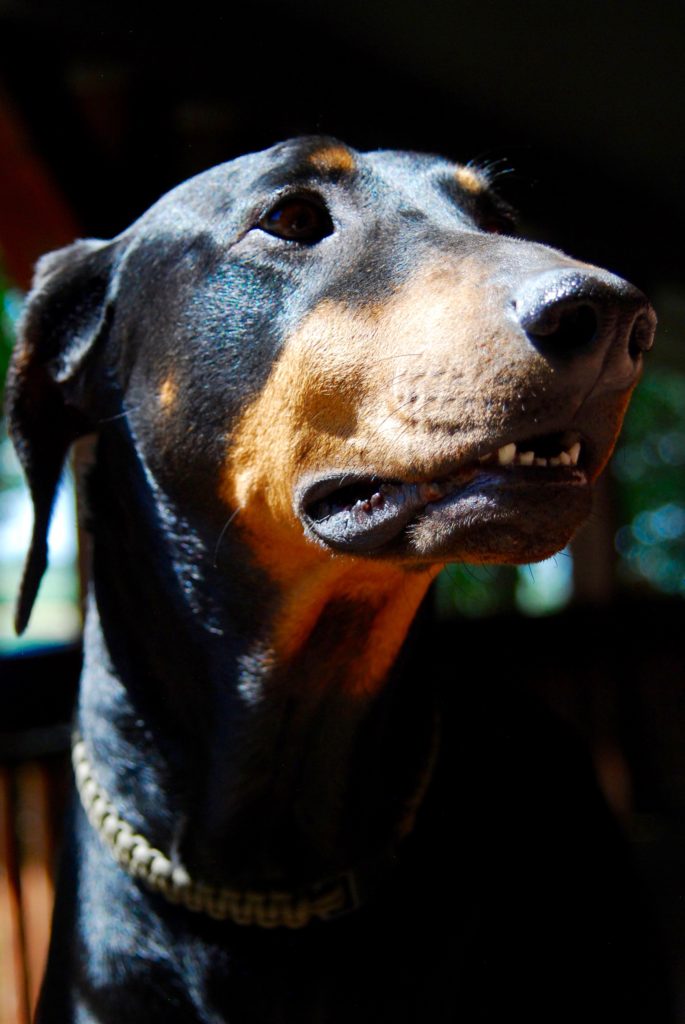 I should have known better.

After my nose told me with 100% certainty that both had been sprayed and I got my gag reflex under control, we banished them both outside for the night. Poppy is a bit of a princess and really doesn’t like to sleep anywhere but in her bed next to Andy’s side of the bed. Needless to say she was a tired pup the next day and didn’t want leave her bed for a week!

I bathed them in the morning, and there is an art to bathing an animal that’s been sprayed by a skunk. The trick with skunk smell is the skunk sprays an oil, so if you wet your dog down before scrubbing, you’ll just spread the oil out everywhere and make a bigger mess for yourself. You’ll be able to see a nice green oily spot if it was a close hit. Last time they got sprayed, I used a mix of hydrogen peroxide and baking soda, this time I used the same mix but added dish soap and a little laundry detergent and it worked pretty well. It takes the edge off, but they still have a lingering scent that will last for a few weeks.

While an exciting skunk experience, I don’t think anything will top when Poppy decided to hunt one in a bush and Andy encouraged her, unaware it was a skunk, and she got sprayed point blank in the face. She drug her face in the dirt all the way home and then plunged her entire head into the first water trough she could find. Dogs just don’t learn some lessons, ha!

And that is why my favorite animal is not a skunk. In fact, it’s probably one of my least favorites. Right after wild birds. Those are terrifying. Sandhill cranes give me nightmares.

PS: If you’re wondering why we shot the skunk, it’s because A) There is a robust and healthy population in our area. B) They are impossible to trap and move without YOU getting sprayed. C) They will just come back. Please, don’t feel bad. If you do, you can bathe and adopt my dogs for a while when they get sprayed next time. I think that will cure you! Or you can come and try to move the skunk. 🙂