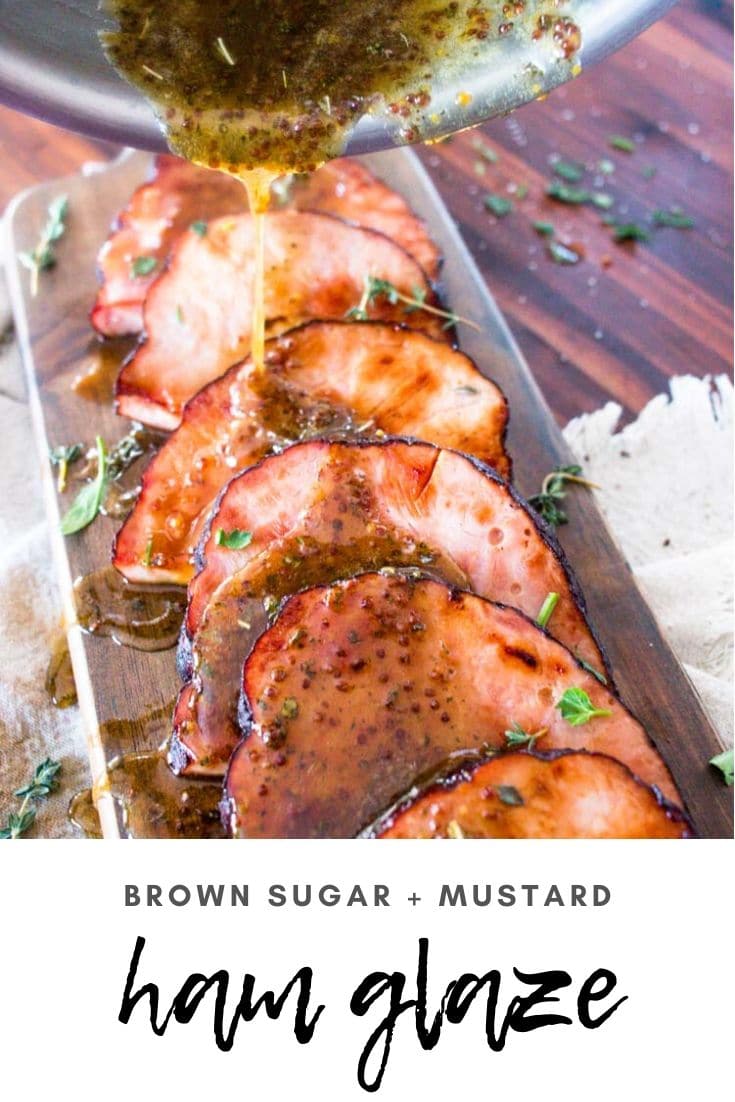 Making a brown sugar mustard glaze for ham is super easy and can be done in less than 10 minutes! Serve it over holiday ham or for a weeknight meal.

Having a delicious brown sugar glaze for ham is always a way to win with your ham dinner. Having a ham without a glaze is like having a donut without any glaze. Sure, it can be done- but it’s just not the same.

This brown sugar mustard glaze for ham is an absolutely perfect way to give your ham that little extra something that it needs to be special and extra delicious.

With its sweet and tangy flavors adding to that soft and salty ham in ever bite it’s an incredible combination.

The flavors of this glaze would be perfect for some acidic and buttery side dishes. Imagine some lemon roasted veggies like my oven roasted asparagus and a nice pile of buttery mashed potatoes on the plate next to your glazed ham.

What’s even better is that you don’t need much to make this brown sugar glaze. With about 6 ingredients and 5-10 minutes, you can have a deliciously thick glaze ready for your meat.

You’ll just need a whisk and a small sauce pot to cook it and then you’ll have to figure out how to apply it to your ham.

For larger hams, you can brush your brown sugar glaze over the scored skin prior to baking and then reapply a nice glaze about every hour that it’s in the oven cooking. This helps to get the flavor to penetrate the meat and develop a nice and thick crust.

For smaller cuts of ham like a simple ham steak, you can just apply the glaze at the end of the cooking process, as you’re serving it.

The good thing about this is that the brown sugar glaze then gets all over the ham and not just around the edges- yum!

How to Make Glaze for Ham

Do I Have to Glaze a Ham?

Nope. But a nice glaze for ham is a delicious addition. Not to mention that this is a recipe for brown sugar ham glaze, so it’d be pretty silly to not use it. ;p

Do You Have to Score a Ham for Glaze?

If you find yourself with a large ham piece that’s in need of a nice glaze, you may wish to score it prior to applying glaze so that the glaze gets deeper into the meat and isn’t just sitting on the outer skin.

This, however, is completely optional and up to your preference so if you don’t want to score a ham before applying a glaze, you don’t need to.

How Do You Score a Ham for Glazing?

To score a ham, you’ll need a sharp knife. Take the knife and run it along the outer skin in a diagonal pattern with cuts that are about ⅓ in deep.

After a few minutes in the oven, you’ll notice these cuts open up to reveal the diamond pattern more nicely and that they become nice and crispy (especially with the added glaze baked on!) 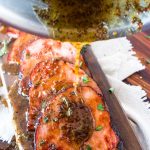 Looking for other great Easter recipes?